War Games refer to a collection of game types in Halo 4 in which you play competitively against other human players. These battles are training simulations performed by Spartan IVs onboard the Infinity, which they use to improve their abilities for Spartan Ops. There are no computer-controlled enemies in War Games; every single ally and enemy is a real human player. 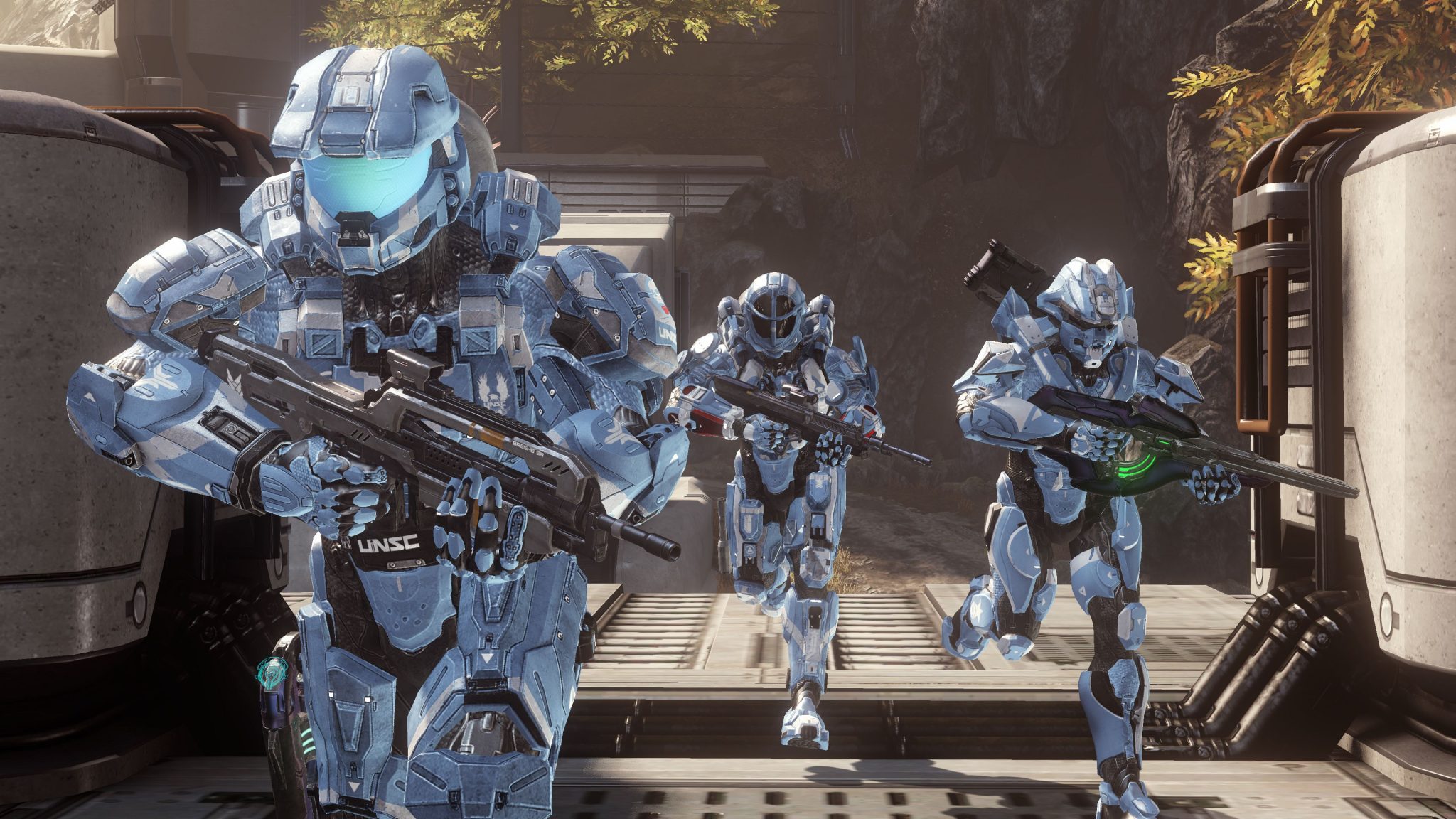 War Games offers an interesting dynamic to Halo 4 quite different from either the Campaign or Spartan Ops. Because you are playing against real players, you get an opportunity to fight enemies much more intelligent than those in the Campaign or Spartan Ops. Therefore, some of the strategies that I provide for the Campaign do not work nearly as well in War Games. There is no single “best” strategy, so experiment with many different tactics and choose one that best fits your strengths and style.

In War Games and Spartan Ops, you receive experience after completing each game. This experience is used to level up your Spartan-IV character. As you level up, you unlock new equipment (such as weapons, armor abilities, and perks) and new armor. Each level requires more experience to unlock, so you will level up quickly at first and slowly later on. After you reach level 20, you will have unlocked all equipment, and any levels past that will have little effect on your gameplay.

There are 3 ways to gain experience. The primary way is to complete games in either War Games or Spartan Ops. After each game, you will be rewarded a fixed completion bonus and a much smaller bonus based on your success during that game. In general, you will receive around 2500 experience from shorter games (slayer, oddball, etc.) and 3000 experience from longer games (Spartan Ops, Big Team Battle, CTF). The second way to gain experience is by completing challenges. There is an assortment of War Games, Campaign, and Spartan Ops challenges that you can complete gaining extra experience, with rewards ranging from 1000 to 20,000 experience depending on the difficulty of the challenge.

After you reach level 50, you can choose from 8 different Spartan specializations. Each specialization requires 10 levels to complete, and you unlock new armor with each level. After completing the final level of specialization, you unlock a new perk. While these new perks only have a minor effect on gameplay, they offer useful bonuses such as more experience per game, faster assassinations, or longer overheat times on vehicles. Once you complete all 8 specializations and reach level 130, you have completed the leveling progression and will no longer level up.

Throughout the leveling process, you will unlock numerous armor pieces, all of which can be accessed from the “back” menu. This allows you to customize the way your Spartan-IV looks in both Spartan Ops and War Games but has absolutely no effect on gameplay. You unlock new armor by reaching new levels, completing commendations, and completing armor-specific challenges.

Unlike in the previous Halo games, you can create your own loadout in Halo 4. Each loadout consists of a primary weapon, a secondary weapon, an armor ability, a grenade type, and two perks. You can have 5 different load-outs simultaneously, allowing you to develop different combinations for each situation. These 5 load-outs are used in both Spartan Ops and War Games, so I suggest allocating 2 load-outs for Spartan Ops and 3 for War Games. Below, I discuss which equipment to use in your War Games load-outs. However, these are only my opinions; you should develop a loadout that fits your play style the best.

Primary Weapon: I highly suggest using a headshot weapon as your primary weapon, as headshot weapons have a much longer range and kill enemies faster than any of the assault weapons. I suggest that you use either the DMR, Battle Rifle, or Light Rifle. Of these Options, the DMR is the most accurate, the Battle Rifle deals the most damage when not zoomed in, and the Light Rifle deals the most damage when zoomed in.

Secondary Weapon: You should always use the Plasma Pistol as your secondary weapon, no matter the situation. Although the Plasma Pistol and headshot trick do not work very well against human players, you can still use the Plasma Pistol to stun and jack vehicles, remove people’s shields, and melee them. The Magnum is inferior in damage and accuracy to the headshot rifles, and the bolt shot does not deal enough damage to be worthwhile.

Grenade Type: I suggest that you use the Frag grenade as your grenade type. You can bounce Frag grenades around corners or up gravity lifts, allowing you to kill players that are out of your line of sight. When used in combination with Promethean Vision, this can be a very effective tactic. However, if you are very good at sticking your opponents, you may wish to use the Plasma grenade.

Perks: There is a large assortment of perks that provide minor bonuses. It would help if you chose whichever perks complementing your play style the best. Some of my personal favorites include extra ammo, more frequent ordinance drops, and faster armor ability regeneration.

To obtain non-loadout weapons in War Games, you will need to rely on Ordinance Drops. Ordinance Drops are a new game mechanic implemented in Halo 4, replacing the previous weapon spawn system. Weapon crates are dropped onto the battlefield from above and contain either a weapon, a power-up, or two grenades. There are two types of Ordinance Drops, and they are as follows:

Map Ordinance Drops appear throughout the map at the start of the game and redeploy after a certain amount of time. These drops usually contain a tier 2 (Shotgun, Saw, etc.) or a Tier 3 (Rocket Launcher, Binary Rifle, etc.) weapon, though they can also contain grenades or power-ups. Any player can access a Map Ordinance Drop simply by walking up to the weapons crate and pressing x, just like swapping with a weapon on the ground. When you are near Ordinance, it will show up as an icon on your HUD. This icon displays your distance from the drop and what equipment is in the drop, so it is a useful tool for judging if it is worth taking the Ordinance. Drops of higher value take longer to redeploy.